I have just placed my order for my first 2 bee hives!  I'm very excited about this as I've been reading about beekeeping for over 10 years.  I've also found a local bee keeper who has taken me under his wing and is allowing me to help him with his hives.  Hands on training is the best way to learn!  I hope they will arrive tuesday of next week.  That gives me a week to assemble, paint and set them up before my nucs are ready for pick up.  A nuc is a 5 frame bee package with a queen, workers, and drones.  It is a jump start to a hive rather than a 3 to 5 pound bee package.  The frames have brood, pollen, and honey reserves on them already.  I don't expect to have any surplus honey this year for my mead making... but next year there will be many many pounds of golden goodness!  There will be a special blog post with pictures on the assembling of the bee hives.
Mikey
Posted by Michael E. Hearrold II at 7:49 AM No comments:

There has been quite a few changes going on as to my focus, and this blog.  I am still deep into the primal/paleo movement.  But, I have so much more to offer than just recipes and workout ideas.  So... I will be relaunching the blog shortly to bring in articles on my other areas of interest.  The following are a sample.  Organic gardening.  Back yard chickens.  Beekeeping.  Brewing.  BBQ.  Wood working.  And many others.  My main focus is trying to get as much use out of my 1.5 acres of land as possible.  I have so many hobbies and projects going on at a given time that some of that knowledge will be useful to some folks.

On the fitness side... I've gotten 2 new kettlebells from DragonDoor.  A 53lb and another 35lb.  I've been doing doubles with my twin 35's and they are killers!!!  2hand swings with the 53 pounder is MONEY my shoulders are toasted!!!!!.  I'm still eating primal and cooking up a storm.  And much brewing of mead has lately joined the kitchen work.  The garden is humming along nicely.
Talk to you all soon with pics and new articles!
Primal Mikey.
Posted by Michael E. Hearrold II at 9:28 AM No comments:

Made of Corn by Joe Nash

This essay was written by my brother Joe Nash.  It sums up the state of our food system, and our health situation that is caused by our farming system.  It will open your eyes.  All you primal/paleo lifestyle advocates must READ this essay.  Repost it  with credit to it's author.  It is a game changer.  He sums the entire situation up for all those we are trying to educate.  I am proud to pass on his work.  Read this!

His blog can be found at http://joegoesbacktoschool.blogspot.com/

Busy busy time.  Spent all weekend doing strength training in the form of cleaning out the garage and tilling the garden in prep for planting. Tilling was going fine until the motor mount bolts fell out of the borrowed tiller and the belt fell off.  Was only about 3/4ths of the way thru the garden.. Grrrrr.

Been doing my primal improvised training, a bit of kettlebell, eating primal, and not really paying attention. Got on the scale and noticed I've lost another 3 lbs of fat while I wasn't watching.. AWESOME!!!!

Hey all, just checking in for a quick moment.  Life is so busy right now not much time to blog or post.  But rest assured I am still living the primal lifestyle, working with my kettlebell and running my fool arse off in my vibrams.  Spring is about to hit and I am prepping the garden for planting, relaying out the interior of our house, and running around like a crazy man.


Hope you are all keeping busy too!!!
Poppabear.
Posted by Michael E. Hearrold II at 11:37 AM 1 comment: 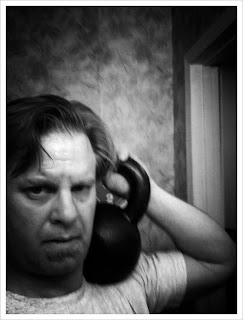 I did it.
15 a side full turkish get ups.
15 a side Clean and Press
200 2hd swings.
same training session in under 40 mins with my 35lb kettlebell. I can now get my 53 pounder!
It will be weeks before I will have the money to buy it, so I will spend the time working on this conditioning, making it easier, taking less time, and working on my form.

It wasn't easy, but it didn't kill me either. The more I do it, the easier it will become, and when I can afford my 53 pounder I'll be in even better shape to use it once it gets here.

Feeling under the weather

The whole family has been fighting the flu for about a week now.  We are all hanging in there.  I'm Just about over the whole thing, and as soon as I am, there will be some new blog entries.  I have been taking this down time to think about the focus of my blog, and how to make it stand out among all those other primal/paleo blogs out there.   I've got a few ideas...

I will share them with you soon.
Poppabear.
Posted by Michael E. Hearrold II at 5:14 AM 1 comment:

Michael E. Hearrold II
Rural, Missouri, United States
I am a renaissance man who spends my days writing, drawing and making music. My hobbies consist of collecting hobbies, tormenting my wife and daughters with bad jokes, silly stories and interesting cooking experiments. I live on a farm in the secluded wilds of Mid-America, working in my garden and feeding my chickens. I have been described as a jack of all trades and a master of none. And that's just the way I like it.